Planting Before a Rain 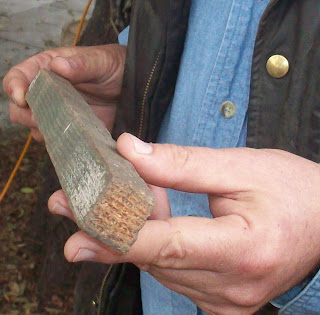 Rain comes rarely in Southern California. We net something like twelve inches per year on average and almost all of that falls in the months of January, February and March. There is usually one small shower in July and October without any appreciable accumulation, and a shower or two in November and December that are a little more beneficial. Right this second, our gardens are really dry and we will be grateful, with or without Thanksgiving, for any and all rain showered upon us.

Rain is forecast for the next few days, and we hear from folks about a mile away that it’s heading towards us right now. Just in time, I’ve run wildly through the garden trying to take advantage of this by sowing seeds of carrots, beets, parsnips, spinach and lettuce. (I think the plural of lettuce is ‘letti’ despite the protestations of my spell check that insists lettuce has no plural. Obviously not composed by a gardener…)

Normally I plant small, short rows of these and I sow them every several weeks in an attempt to provide myself with some fresh produce consistently through the season. I am single – I don’t need a forty foot row of carrots or beets or of anything else – I don’t even have forty feet of garden from any direction anyway! I use a garden stake, about 1” square, that was sold with a vine wrapped on it. Originally about six feet long, I’ve cut this down to a two foot length. By turning it on edge, looking at it from one end, it’s a diamond shape, I have an edge I can press into the soft soil where I want to plant, as shown above. This creates a perfect two foot trough in which I can sow my seeds. For carrots, and carrots only, I do not cover the row with soil. Our soils in Southern California oftentimes crust over when they dry and that crust can be too hard for the little carrot seedlings to push through. Other seedlings aren’t as delicate and can break out of the ‘earth jail’ so they don’t get the treatment. Although the vermiculite does mark the row quite nicely.

But, with rain coming and a gathering supply of old seed, I have decided to let ‘er rip! We have carrots from last year and spinach and lettuce that’s older than I want to admit so we’re sowing them out thickly. The rain comes through, waters these seeds for us and, if we get good germination, they’ll be a bonus. I would like a large amount of beets and/or carrots at once just for pickling. I have a great recipe handed down from my Mother for pickled beets and I want very much to try a good recipe for those spicy pickled carrots one finds at Hispanic restaurants – if you know of a recipe like that, send it on over.

Just a note on germination. Seeds vary in the length of time they can be kept before the germination percentage drops off, from carrots which seem to last just about a year before they’re no better than dust, to tomatoes which can keep for about seven years without much loss of vigor. Seeds kept cool and dry will last longer than those kept under more difficult conditions and I'll explore that topic one of these days on down the line.

I see raindrops… is this it or just false advertising?