It's Still Winter in The Garden 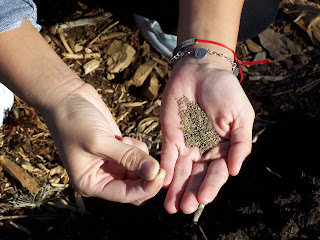 One of the Learning Garden's volunteers, Carolina, shows a handful of carrot seed prior to sowing them on a prepared bed and covering with screened compost. Thoroughly watering the freshly planted seeds is last step.


It’s still Winter in the Garden and we are still very much planting winter vegetables – while in the catalogs we are looking at summer veggies, we are still planting winter’s crops. We won’t begin to sow summer seeds, until the end of January – and even then, we are pushing the envelope – I want to get early tomatoes in especially early so our high school gardeners can harvest a ripe tomato before they leave for the summer (it seems like a long way away, but our foggy, cool coastal climate slows tomatoes down to a crawl until July through September when we get some real heat).

Today in the Garden we were sowing carrots. We could have also sown beets, parsnips, radishes, and turnips, but we were fixed on carrots today. I lost a baseball bet with Mike McGrath, infamous from a variety of horticultural pursuits, including currently hosting WHYY’s “You Bet Your Garden.” Mike is a rabid Phillies fan - but then, there is no other kind, they're all 'rabid,' and I am a Dodger fan, so when the Dodgers faced the Phillies in last year’s National League Pennant Championship Series, I challenged him with a bet of five pounds of carrots – somehow he figured that I was already growing five pounds of carrots, but I had no intention of losing.

Thus it was that we sowed carrots – a lot of carrots to fulfill payment to the winning Mr. McGrath, and we transplanted cabbages from starter pots in the greenhouse out to the garden. We have baby plants of lettuce, broccoli, more cabbage and celeriac in pots a few weeks away from setting out in the garden. He can gloat with his victorious baseball team, but I wonder what he's planting two days from New Years?

After setting the cabbages out in the garden, we sowed more seeds of lettuces (four different varieties – including Red Deer Tongue, Green Deer Tongue, and two others) for setting out in the garden in the next month. We will still start more seeds of broccoli, cabbage and lots more lettuce – I’ll keep starting lettuce up through May although I’ll switch to varieties described as “heat resistant” like Summertime and Jericho and I’ll plant them in dappled shade – and I’ll be direct sowing more seeds in the garden of beets, parsnips, and other root crops in spots here and there. Here and there, I might also sow a short row of arugula, spinach and other greens that don’t like heat.

We did get some rain last week and the soil is soft which makes for pulling weeds easier than normal so we’ve also been doing some good weeding too. Even the really long rooted mallow plants come out more easily – as long as they aren’t above belt high and then you need to inspire them with a hand grenade or something to free that tap root from its hold on the soil. (On the other hand, these plants do bring up nutrients from the subsoil and make a wonderful addition to a compost pile.)

It’s a gorgeous time to be a gardener in Los Angeles; this is one of our premier times in a Mediterranean garden. Grab a cup of coffee and come on out into the Garden – it’s like a Monet painting.