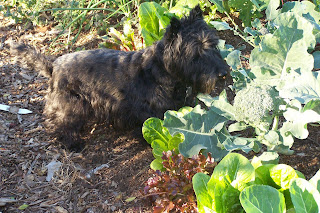 Casey inspects winter vegetables: quality control at its most effective!

By now most of us have been pretty inundated with the host of shopping catalogs, a problem year round nowadays, but as the year wanes away they are more ubiquitous than chiles at a TexMex cookoff. However, in the midst of all the consumer crap, don’t miss the truly valuable traditional catalogs of this season: the new years’ seed catalogs.

In Southern California, we don’t have the stark seasons that mark the months in other climes. We do have seasons, let no fool tell you we don’t – they have confused ‘weather,’ of which we have very little, being bathed in sunshine for over 350 days a year, with ‘seasons’ which all gardeners know we do have – just try to grow tomatoes in winter – or carrots in summer. But it was in these other climes that the tradition of seed catalogs got established and, being a boy from Kansas, I’m here to tell you that the annual photographic orgy of new seeds still warms my heart with memories.

In the winter months of my childhood, the garden was frozen over and buried under a blanket of snow and my youth was preoccupied with keeping my feet warm. My feet were invariably frozen from the first of November through the end of March and it made me miserable. I never learned to sled or skate because I did not want to venture from the warm house for recreation. I did learn a ferocious game of chess and became somewhat skilled as a cat herder in attempting to get them to stay on my cold feet for warmth. A few cats got the message and were delights – I wouldn’t say they were ‘trained’ but they did spend considerable time ameliorating my suffering.

The other blessing of those winter months were the seed catalogs. We were mailed catalogs from Burpee, Henry Fields, Gurney’s and others, which all came at the time of year when gardeners throughout the frozen world were depressed and undone. With their analgesic daily efforts in the earth ripped from their clutches and the beauty of the garden hidden by ice and snow, these people were prime targets for pictures of blooms in rich glorious color, eggplants hanging seductively from gorgeous green plants, sweet corn ears with the husks teasingly parted to show the heady sight of fresh kernels bursting with milk and flavor. Yes, folks, vegetable porn has been a problem with much deeper roots than you would have imagined. It’s amazing that the Kansas attorney generals, with so much free time on their hands to reconsider Darwin at length and other such superficial pursuits, did not at one time take Mr. Burpee to task for his wanton display of plant sexuality.

But, let me tell you that it was probably those very pictures, added to the experience of cold feet and the sting of losing yet another game of chess to my grandfather that has warped my mind completely and is the real purpose you find me writing here today. Those seed catalogs were not my problem, but my salvation.

Burpee’s was the best because the layout afforded bigger pictures than the others and the printing quality was top notch. Near the fireplace, I spent hour after hour reading all the descriptions of the multitude of varieties, my mouth watering, my fingers aching for dirt under my nails and my clean knees begging to be covered in moist, brown earth. I circled hundreds of choices which I showed Grandpa, not understanding that he would not order a tenth of what I had circled. He saved seed from year to year and thus had little interest, or need, for the gorgeous pictures that had seduced me. He ordered a little here and there, but it was not the ones I drooled over.

Still, a young man, when confronted with a ripely red strawberry, fresh corn, peas and potatoes, does not quibble that this is not the one that helped him survive his depression in the middle of winter. The eating was always good.

I still look through the seed catalogs in winter. The names have changed, Burpee is no longer a respected name in the seed business having forgotten the home gardener and catering pretty much to the hybrid, ‘bigger is better’ crowd. New names have appeared, like Native Seed/Search, Pinetree Garden Seeds (my favorite), Peaceful Valley Farm Supply, Seed Savers Exchange and Nichols in Oregon. I eschew the big names – even Cook’s is no longer a family enterprise. I want the seeds my grandfather saved and not the big fancy hybrids that produce luscious, tasteless fruit that ships well and sets pound after pound of uniformly shippable quasi-food.

My Pinetree catalog was in the mail a week ago, buried among ten others of dubious value hawking electronic goods made in China that help depress our economy (why do we think that the problem is that we are not buying enough vs. not producing enough?) and oppress the Chinese workers to the profit of the very people the American taxpayer is bailing out (not that I have any feelings on any part of this subject), and within the week I had a seed order of $30 off to them. The cover is already ripped from the catalog proper, it’s been abused so badly. Not only have I gone through it several times in as many hours, I spent a memorable afternoon with someone I love very much going through the pages and noting her preferences in the margins so that I may properly plant her summer garden too.

The other catalogs are instantly recyclable, I say. Keep the seed catalogs – they entertain, they inform, they are a tradition of an agricultural society and they have proven as efficacious as Playboy for keeping at least one young man out of harm’s way.