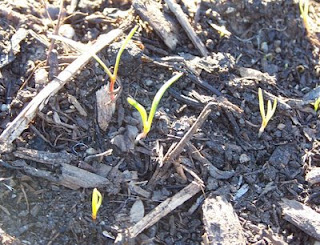 These healthy, little carrot seedlings are spreading their dear little cotyledons to the sky. Because there are two cotyledons, they are obviously dicots. These are the carrots we call "Mike's Carrots" because I lost a bet for five pounds of carrots to Mike McGrath in Pennsylvania - it was over baseball. That's enough about that.

The following problems can occur in seeds indoors or out:
Leaf curl - leaves curling under is probably over-fertilization
Yellowing of lower (older) leaves – also over-feeding – although might also indicate magnesium deficiency (but very unlikely if you are using a commercial potting soil)
Leggy plants – these are long weak stems – longer than normal internodes indicate one or more of the following: insufficient light excessively high temperatures, plant crowding
Leaf discoloration – usually indicate nutrient deficiencies
Pale – if they are getting enough light, nitrogen deficiency
Reddish purple undersides – lack of phosphorous – if (somehow) the soil is too acidic, that can interfere with the plant’s ability to uptake phosphorous
Bronzed or brown leaf edges – lack of potassium or overwatered
Discolored roots - often an excess of fertilizer or waterlogging (usually has a bad odor)
Mold – poor drainage, insufficient soil aeration possibly over-fertilizer and/or lack of air circulation
Damping-off – overwatering and too little air circulation – once plants have been hit by damping-off, they are toast. Avoid it by: good air circulation, don’t overwater, don’t overcrowd your seedlings. Some folks use sprays of chamomile or nettle tea on seedlings as a preventative measure
Skimpy root growth – poor drainage, low fertility of the soil, excess fertilizer, temperature too low or insufficient air space in the soil mixture
Failure to spout – other than being an indication that you have a bad karmic debt to erase, the following might well be wrong: temperature too high or too low, soil that was allowed to dry out, planted too deep, top watering that washed away the seeds, old or poorly stored seeds, insufficient contact between soil and the seeds, toxic soil, damping-off, lack of light for those that need light

david
Posted by David King at 2:00 AM