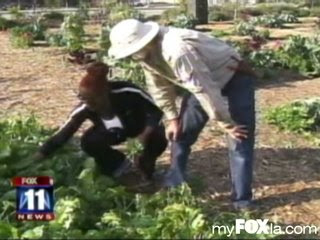 Amina Humphrey and I discuss her garden of greens while Fox News films footage for their story "Recession Gardening" which aired on the March 15th Ten O'Clock News.


I was still at The Learning Garden after the UCLA Extension class on Sunday when a tall blond walked very carefully into the Garden in high heels. High heels and garden paths rarely meet one another because it takes a decent amount of concentration to navigate mulched garden paths without pitching off to one side or onto one's face. But, the intrepid Fox News reporter managed it and here is the result.

One of my students from the UCLA Extension class, Amina Humphrey, did a marvelous job of stating her gardening intentions; I wished I hadn't used the example of 'salad,' as it seemed to trivialize the plight of the unemployed and diminished the output we get from our gardens, but there you go... It was the end of a long day and I didn't think as fast as I usually do.

Still, ya can't throw it back and it's fine to be on the news as long as it wasn't a crime scene!