The Garden In March 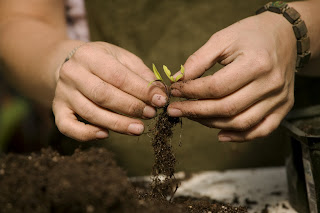 March. Baseball teams are in Spring Training in Florida and Arizona. Tomatoes are growing in a protected location with 'bottom heat' so they can be set out in the garden close to the end of April.

We've all heard the old saying about March coming in like a lamb and going out like a lion, or is it coming in like a lion and going out like a lamb? Whatever the exact saying, it correctly alludes to March as being more schizophrenic than other months. That is certainly a true characterization of March as far as our gardens go. On one hand, we are still tending our winter vegetables, cabbages, broccoli, cauliflower, and lettuce, while on the other we need to be planning on what we will soon be planting for summer.

Those of us on the coast can continue to plant more winter vegetables if we haven't had our fill of all those cabbage family plants. I usually find I can grow winter vegetables right on into late May in most years. Some of the winter veggies will 'oversummer' for us; leeks, fennel, chard and kale will hold on in most summers although they can look downright ratty once our June Gloom has left us.

Royal Purple Pod beans can go in even in February, certainly by mid-March, I'll have a row growing. This is the only bean that will germinate in cold, wet soil. All other beans, in most years, will need to be planted no sooner than late March or early April.

You can buy tomatoes in March, but I wouldn't want to plant them out until later in the month. Tomatoes will survive cool soil, but they will thrive much better in warmer soil. If you want to grow tomatoes from seed, I usually sow mine in February. I start them in a sheltered location – I use a grow mat that warms the soil to about 70° so the tomatoes get off to a good start – I sow basil the same way at the same time. Other summer crops that I start in pots to be transplanted later, including peppers, eggplants and okra, need more heat and I don't even mess with those until after mid-March. They will be ready to sow out into the garden come the first of May (allow about 6 weeks to get them up and away).

This is one of the more busy months in the garden because I should be harvesting from the winter crops and I'm out there looking at those plants trying to figure out where I'll be able to plant the summer crops.

I'm awfully fond of lettuce. One of my Summer rituals is making a big production out of the first BLT of the year where I've grown the L and the T in my garden – if I'm lucky I'll have also baked the bread myself too. The hard part is getting the L and the T to cooperate. Tomatoes love heat, to really fruit they need temperatures above 84° while most lettuce is positively allergic to temperatures above 75°. There are some varieties of lettuce bred to be less heat sensitive – Jericho and Summertime are the two I'm most familiar with – look for them in seed catalogs and try planting lettuce plants North of taller plants to get them more shade.

In one fit of fanaticism, I once grew lettuce year round. I created a bed just for lettuce. I installed a copper snail barrier to keep those salad lovers out, and set up a series of little misters to spray the plants twice a day with a cooling mist. But the most significant feature was an old window screen (frame and all), resting over the plants on four 18” wooden stakes (easily purchased at Home Depot). The screen proved to be the most effective part of the whole operation. I was able to grow lettuce right into the middle of October, when a heat wave and an irrigation failure contrived together to completely fry all my lettuce. Fried lettuce has about the same appeal as month old bread. If you want lettuce all summer you might give this – or some of this – a spin in your garden.

March is a month full of a lot of activity – daylight savings time now starts at the end of the second week and boy do gardeners need that extra hour of sunlight! Look at what you have in the ground and begin to imagine full size tomato, pepper, eggplant and basil plants growing there. Try to contain yourself and get a reasonable view of what you can plant. Check out the suggested planting spaces on the plants you want; measure to see how many you can reasonably accommodate. No, don't multiply by four! (We all do it anyway, don't we?)

david
Posted by David King at 8:09 AM