The Garden In August; Part IV: A Short List of Seed Houses 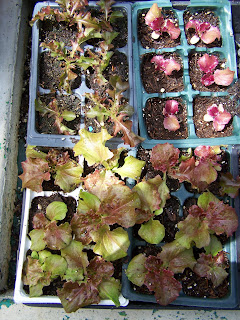 I've started a new blog called "The Learning Garden - Almost - Daily," and this photo of some lettuce seed trials appears in the very first post there. These are so-called 'summer lettuces' that we're trying to ascertain how well they will do in the Southern California summer heat.

Following, I list a few of the seed houses I order from consistently. I tend to order most of my seeds from Pine Tree Garden Seeds simply because I rarely need the quantities of seed per packet that I get from the other companies. I pay less, I can experiment with different varieties and I have less seed left over at the end of the season. What's not to like? Their listings include almost all the main varieties I want to grow.

BOUNTIFUL GARDENS; 18001 Shafer Ranch Road; Willits, CA 95490; 707.459.6410 www.bountifulgardens.org This is a good source for open-pollinated seeds and often have varieties not found elsewhere. They also sell packets of grain seed – grow a little wheat, some oats or rye? Don't dismiss this out of hand – I had a wheat field in my front yard once. It is a good thing to support organizations that do credible garden research.

FEDCO SEEDS; PO Box 520, Waterville, ME 04903; 207.873.7333; www.fedcoseeds.com A very funky catalog, that makes me think of the Trader Joe's Frequent Flier, provides good quality open-pollinated seeds. While their focus is on 'cold-hardy, short season' seeds, we can use a lot of them here. As of August 31, they will no longer take orders for 2009. They begin to prepare for 2010's growing season. Their prices are really low - puts places like Seeds of Change to utter shame. And they are all open-pollinated.

PEACEFUL VALLEY FARM SUPPLY; PO Box 2209; Grass Valley, CA 95945; 916.272.4769 www.groworganic.com A fair priced purveyor of more than just seeds. This is the company to order cover crop seeds and tools as well as veggie and flower seeds. Their catalog is so chock full of data on pest control, fertilizing, cover crop seeds and irrigation; I have used it as a text in my organic gardening classes.

NATIVE SEED/SEARCH; 526 N. 4th Ave. Tucson, AZ 85705; 520.622.5561; www.nativeseeds.org; Like Seed Savers Exchange, this is a non-profit organization that exists to save seeds that have been grown for generations and represent a genetic diverse collection that mankind cannot allow to fall into obscurity. Their efforts are centered on the Native American seeds of the desert climates of Arizona and upper Mexico, which, despite the challenge of desert conditions still represent a disproportionate portion of our modern food crops.

PINETREE GARDEN SEEDS; PO Box 300, Rt. 100; New Gloucester, ME 04260; 207.926.3400 www.superseeds.com This is THE catalog where I order most of my seeds – they are the least expensive. How? The packets are smaller, fewer seeds. And that makes good sense for us with smaller sized gardens. If I want more, I can order more packets – but usually I order several varieties with which to experiment.

SEED SAVERS EXCHANGE; Rt. 3 Box 239; Decorah, Iowa 52101; 563.382.5990 Membership fees $25. Free brochure. www.seedsavers.org This is the other main source of seeds for me. I have been a member for over five years because I believe in the work they do saving the rich heritage of heirloom seed varieties that might well be a thin green line between us and the Monsanto's of this world that are striving to control our food supply. I urge you to order from the Exchange and to become a member; we NEED these seeds.

There are many other seed catalogs out there, some of them quite fun. I used to love to look through all of them and indulge dreams of acres of land on which to grow vegetables until I learned that subsidiaries of Monsanto were buying up some of the old Mom and Pop seed houses and keeping the cute old names. Seminis, Monsanto's seed supplier also lists some of my old favorites as sellers of their genetically modified seeds. Firms like Burpee, Parks, Cooks Garden, Nichols Garden Seeds are listed on the Seminis site as dealers for Seminis. I have changed my recommendations to these few that clearly state they do NOT sell genetically modified seed.