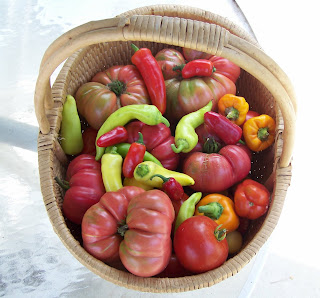 Red and yellow tomatoes co-mingle with green, yellow and orange peppers that is just a glimpse of our harvest right now! An awesome year of production with tomatoes getting hauled out of the Garden every day! In addition, I have been collecting the yellow banana peppers getting ready to learn how to pickle them this coming Saturday. There are few red jalapenos that I'm going to slice up and dry and the tomatoes, we're just going to eat. There are a bunch more in the Garden that are better for preserving and those will be the ones we roast and freeze (more on that in another post) and make sauce from.

Oddly enough, this has been a lousy year for tomatoes for a lot of nearby gardeners. I'm not sure why that should be so, but we haven't had as good a harvest as this since I started working here in 2002!

My paste tomatoes (San Marino) are being eaten by a mammal. As the remains are being left on the vine, I doubt it is the human mammal, more like squirrels, racoons or something along that line. One portion of corn near the tomatoes has been smashed down, and the corn stalks are all splayed out in all directions. It looks to me like a great fight or some mating took place in the middle of my corn. No dead critters, so I'm thinking the latter. Just don't tell school administration!