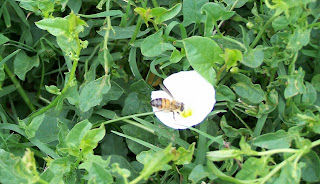 It's not exactly a photographic gem, but this cute little white flower washes out too easily in sun (even on a cloudy day like today). This is Moonflower, Ipomoea alba and it is one of the most obnoxious weeds we have in our Garden. At least this honey bee has found it useful - I followed him through five different flowers before getting him to stay still long enough for my old camera to snap this shot. Most of the foliage in the photo belongs to the moonflower, but there are some grass leaves there as well. The moonflower shows the same leaf as it's twining sister, morning glory (and yams as well).

It spreads by seeds, like most members of the morning glory family, lots of seeds that are spread freely by birds. But this one also spreads by underground runners like Bermuda grass, except that these runners are very thin and break very easily making removal a tedious and timely process. All volunteers at this time are being sent down to weed this vigorous climber that has taken over the rose garden and threatens to ruin the high school beds. If allowed to persist, it climbs up the plants we want and smothers them by interdicting the sunlight. It won't kill most plants, but it will ruin production. I don't think this is a pest of much note in the rest of the US, but where there is no frost to kill it back, like here, it just engulfs a garden.