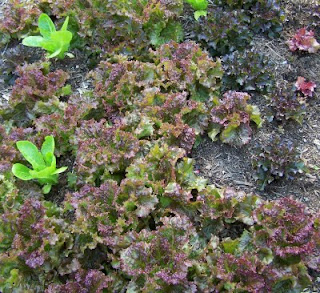 It was just a couple of weeks ago I posted the cute little plants that comprise this summers' "Lettuce Experiment" tiny in their temporary six pack homes. A few weeks along and they look a lot more like lunch. Four of the five lettuces chosen for the project are happily growing on to size in our Garden

It hasn't turned out to be much of an experiment! This summer has been so darn cool that we're not getting a good look at which lettuce varieties are really heat-resistant. Smoke resistant maybe (some really bad wildfires are burning on the fringes of LA, but our skies are covered over with smoke and ash making breathing difficult, but proving which lettuces taste best growing under smoke and ash was not the point of this experiment!), but not so much heat resistant. We have had precious little heat until these last few days when it finally soared into triple digits. In this photo, green Jericho, is nestled in among the very dark red Bughatti, the vigorous Red Fire and the much more reticent Red Sails. Missing from this photo is Summertime which had very poor germination and hasn't made it out of its first six pack yet!

These photos which are making my mouth water to try, don't tell the story. A big ol' head of lettuce isn't worth the act of harvesting if it is bitter or tough. That's where the judging will really happen - by the forkful!

That's the point of growing your own.