The Garden in October, Part II 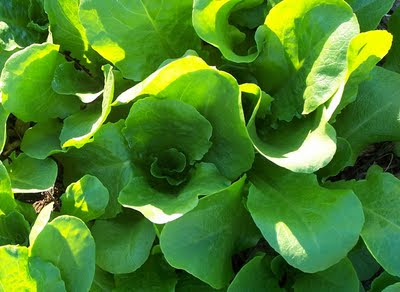 Lettuce from seed looks beautiful in the late winter sun!  A romaine lettuce like this is easy to grow and will look good no matter where you plant it!

Direct sowing of seeds gets far too much mystical billing. It’s easy. The hard part, in our busy world, is staying disciplined enough to keep them watered. Remember, the seed wants desperately to grow, that is its only “job.” If you provide enough water for the seed to break its seed coat, you will see a little pair of leaves soon above the soil. These are called cotyledons and, if there are two of them, you have what is commonly referred to as a 'dicot.' There is only one other kind of flowering plant we would be concerned with in a vegetable garden and that has only a single seed leaf and is called a 'monocot.' Monocots are all the grasses, which includes grains like corn, wheat, rice and barley.

Take note of all the little cotyledons of the plants you grow and soon you will be able to tell them from the weeds. This is somewhat important. If you can rid yourself of weeds before they get really big, you have a much easier job of it; if you rid yourself of all the wrong plants because you mistook the lettuce for dandelions, you'll be a very disappointed and frustrated gardener!

Composting is one of the more essential parts of gardening. Gardening is a life cycle and composting is that part of the cycle that returns nutrients and fertility to the soil. In our culture, we don't like the smell or the thought of decomposition, yet a knowing gardener loves the smell of rich compost; that smell, incidentally is from actinomycetes, a fungus that is in the same group of organisms as penicillin.

Somehow, fall always reminds me of composting probably because I grew up in those colder climes where fall signals the oncoming winter and so marked the end of the growing season. And that leads to thoughts of composting. At least that's my story and I'm sticking to it.

You can get absolutely nuts trying to build a scientific compost pile, but let me offer that I don't do all that. Decomposition happens. Just leave some veggies in your fridge too long and tell me they did not decompose. And you didn't have even think about carbon to nitrogen rations (c:n). You do want to understand the process – especially if you don't have the space to leave something sit for 9 months, which is what I used to do – and get usable compost in less time that it takes to grow a decent cabbage.

Remember you have 'browns' and 'greens,' names that are somewhat misleading. 'Browns' refers to carbon material which is usually brown. This is dried leaves or woody pieces. 'Greens' are those materials full of nitrogen – usually represented by grass clippings, but all of your table scraps are nitrogen sources too and they, though a different color, are classed as 'greens.' While we can specify the ideal carbon to nitrogen ratio, achieving it is always a meandering attempt to meet an approximate target. And you never have composting materials in the right amounts to achieve an ideal c:n ratio. So, add as much of the green and the brown as you have. Mix well and water – keep moist. Make a pile that is at least three feet by three feet by three feet. Keep moist. Turn the parts that are inside, outside and the parts that are outside, inside. Keep moist. Not soggy, but moist. In about 9 weeks of warm weather, you'll be able to use fresh compost. Sift out the big honking pieces and return them to the pile (they will help get the pile off to a better start) and build it again.

Honestly? I usually dig a trench about one foot across and two feet deep and as long as it needs to be to handle what I have to compost. I pick a part of the garden I won't use for a few months and I add the compostable materials, covering with soil as I go. I add to the trench every day I need more room for materials. Eventually I'll simply plant right into that soil. No big deal and it works without a lot of reading.

You can find the composting technique that thrills you. The important part is that none of that rich material gets thrown into a land fill! That is unconscionable! All of the plant wastes from the kitchen and table are wonderful food for the garden and they are free!

However, for apartment dwellers, condo owners and others with no easy access to land, vermicomposting is the answer you are looking for! And you didn't even know you had the question! It's easy, the result can be used on plants in pots and your garbage need never grace the entrance of a landfill ever again!

OSH sells two storage bins that work very well for vermicomposting.  The smaller bin is a 10 gallon container by Rubbermaid called Roughneck Storage Bin #2214-08. It’s dimensions are 9” x  21” x 15” , comes with a lid and is available in various colors.  This size works well for a family of two.

A worm bin can be made of wood, but plastic seems to work better longer because it won't rot. Your bin must be tightly covered – worms cannot live in light and you don't want them to escape! Punch or drill holes around the top third of the vertical walls to allow air to circulate – punching them with a nail is best because any larger of a hole will be an escape hatch for the explorers in your worm population. You should do the same thing with the lid. Oxygen in the bin will allow the breakdown of materials to proceed aerobically, which means it won't stink and your worms won't suffocate.

Wet a sheet of cardboard or a section of newsprint – soak thoroughly and wring out to where it is as moist of a well wrung sponge. Worms will use this as bedding, and eventually you'll need to replace it

as time goes by.

Red wigglers will reprocess kitchen waste such as: vegetables, fruits, eggshells, teabags, paper coffee filters, shredded paper towels, and coffee grounds. They particularly like pumpkin, watermelon and cantaloupe. Avoid citrus fruits because they are too acidic for them. If you pamper your worms by cutting food scraps into small pieces, the worms can finish them off that much faster, I am not, however in the business of making life wonderful for a bunch of worms – I throw it in whole and they take care of it sooner or later. Burying the food scraps into the bedding will help you avoid fruit flies and not adding meat or fish to the bin will help prevent cats and dogs from investigating the bin.

Feed the worms your scraps as you have them available -ideally, no less than twice a wee – however, I have gone on vacation for a week and fed my worms nothing in that time and did not come back to a hell hole of a worm bin. Don't stay up nights worrying about them. These worms prefer a pH of something close to 7 and the temperature needs to be between 50 and 84 F. Don't let the bin dry out.

Harvesting the vermicompost can be done several ways, but the way that is easiest and therefore my choice is called 'side-harvesting.' Feed the worms on only one side of the bin for a few weeks which will cause the worms to migrate to that side. You can then begin to harvest the worm compost from that unoccupied side of the bin where you will eventually, once you've finished harvesting (over a few weeks), begin to add fresh bedding on that side causing them to migrate to the new bedding and allowing you to harvest from the second side.

You can make a it lot more complicated than this, but really, you have better things to worry about, yes?