The Year In Review: Part I, The Winter Garden 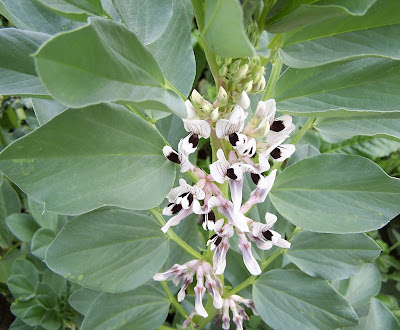 Fava beans are not only a tasty addition to a diet, they grow in the cooler months (about the same time you would grow peas), and the flowers are lovely.  Give 'em room -they are big plants!

I grew up in NE Kansas and all through my childhood, spent winter months with the Burpee catalog. I would read all the descriptions of the vegetables and compare them over and over again. Grandpa, who saved his seed, had no use for 90% of all they sold, so I rarely got to see any of my multitude of lists even purchased let alone grown. Burpee went out of business for a while and had a bumpy few years, now is back, but really is only a shadow of its former self offering a rather paltry selection of seed that usually isn't much for the home gardener. However, many other catalogs (from seed companies or seed savers) have taken up the slack – I've written elsewhere on my favorite catalogs. But how was the year just past?

Of course, in LA, we've got the current winter garden just planted, but for LAST winter, here's some of our results:

Artichoke: I know I'm teasing the rest of the world, but I pay rent here so I figure I'm due my share of teasing. We had a great harvest last year of artichokes – mostly Green Globe Improved. They all produced big beautiful chokes with abandon. We had respectable harvest from Violetto which I love, but it wasn't nearly as productive.

Beets: Burpee's Golden and Chioggia - both are dynamite and steady producers year in and year out and both are usually from Pinetree although I have been known to get seed from Peaceful Valley Farm Supply too.

Broccoli: Nutribud is an OP of respectable performance; earliness is right up there with the hybrids and the size is comparable. As the name suggests, it is reported to have a higher percentage of glutamine. I add in a few plants of Premium Crop or (less often) Bellstar because I hate to rest on one crop, but I really expect most of my broccoli to be Nutribud.

Brussels sprouts: Bubbles was the hybrid we grew – someone had given me a couple of plants. They got whitefly bad and I couldn't see cleaning each little sprout thoroughly enough; although a friend did and sent me back a lovely dish of them (thanks Mary!). Between cabbage and broccoli, I think I get enough of this family to skip Brussels sprouts.

Cabbage: A good year for cabbage for us. We were donated a pointy headed hybrid, whose name has been lost to prosterity, produced huge 10 pound heads and was successful wherever we planted it, but was not any better than Danish Ball Head which is an OP heirloom. Both were huge solid heads and we ate and ate and finally learned how to ferment cabbage to be able to eat it the rest of the year (I still have some and this year's cabbage is in the ground !)

Carrots: I grow Mokum and Yaya, both hybrids. Yaya is the winner, but I can't always find the seed, I that came from some outfit in the Northwest I think. The seed was expensive (by my standards), but it was a sure winner in less than ideal soil. Mokum, from Pinetree, is always a dependable, decent carrot.

Cauliflower: Mark Twain is supposed to have said that 'cauliflower was cabbage that had gone to college' and I can't afford the tuition, so I stick to cabbage.

Celeriac: First year with this and I like it. I don't grow celery because it's a hard plant to grow and home grown celery has always tasted bitter to me. Celeriac, on the other hand, was easy to grow and produced well. You can't smear a hunk with cream cheese or peanut butter and have the same delightful appetizer, but it does a marvelous ballet in soups. Large Prague was our selection and I've not had experience with anything else.

Chard: (I'm dispensing with the 'Swiss' part, feel free to join me!) We had seed from Seed Savers Exchange of Five Color Silverbeet and seed of Pinetree's Orange Fantasia. Both were incredibly productive – although I've never known chard to be unproductive, so I'm not sure that's saying a lot. Someone gave us a few plants of Sea Foam and that one has spectacular production. Still, I like the red chard more and I think the orange is one helluva show stopper!

Fava beans: Windsor is my favorite and we get pounds of beans from each plant. In fact, I've given up on peas preferring to grow favas, garbanzos and lentils because I don't feel like I get enough to eat from peas.

Garlic: I love Spanish Roja and Music - hardnecks are supposed to not like warm climates, but I have great luck with them. Last year, the crows got to them. They don't eat the garlic, but they pull them out of the ground. After three or four go rounds with this (they pull, I replant), the cloves were hopelessly intermixed so which one was the better producer is anyone's guess. I'm starting with fresh seed garlic this year: Music, Spanish Roja, and Red Toch!

Kale: Redbor works for me. I had some plants of Dwarf Blue, but felt like that was a very stupid idea – same footprint for half the plant. What WAS I thinking?

Leeks: King Richard is my usual dependable producer but last year was a really so-so harvest. I think I ignored it too much.

Lettuce: I'm one of those who can't get through the lettuce section of a seed catalog without ordering four or five more packets! I could supply a large army with lettuce if I were given the land to do it. Marvel of the Four Seasons, Brown Winter, Red Winter, Deer Tongue, Buttercrunch, and on and on and on.

Onions: I buy plants from a local organic farm supply, but they sold out so I had NO onions. Disaster. But usually I grow their Italian Red Torpedo – a delicious onion that is absolutely stellar on the grill. Onions, unlike almost every other veggie we grow is 'day sensitive.' Most onions offered in the States will not bulb in LA because they are 'long day' plants and we need to grow 'short day' varieties. So most folks will not be able to compare to our experience.

Potatoes: We gathered leftovers from bachelor friends (they sprout in the pantry and we just plant them) - I don't know the varieties but we had a good harvest.

Shallots: Wow! I had never grown shallots before, but I have found they are easier to grow than onions and more productive! I planted seed from Pinetree and I was so impressed, I'm back for more! Olympus and Bonilla were both good performers.

Turnips: Purple Top White Globe is the only one I've ever had luck with and I have a LOT of luck with it.

All in all, this was one of the very best harvests we have ever had. We put up food, donated several tons to the Westside Food Bank and still ate like kings! It was all that compost, I tell you. The rain wasn't any great shakes (about 10” - less than our normal 12”) and there were several devastating hot spells in November, December and again in January. In fact, the winter garden last year got killed outright by a hard couple of weeks of Santa Ana winds that sent the thermometer soaring into triple digits several times and ruined numerous plantings. Oh, and I can't forget the mouse in the greenhouse that ate all the starts in January. Thank God for a long growing season!

What varieties have you had success with this last year?