Sheet Mulching To Kill The Lawn 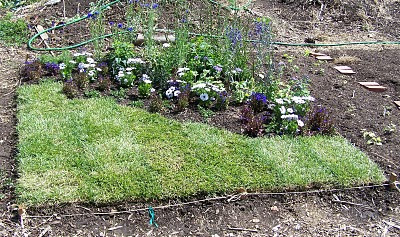 The Learning Garden doesn't condone lawns, but this lawn has been planted, sadly, as a part of a UCLA Extension class - we in the Garden are amazed that planting lawn, in this day and age, can be considered good horticulture practice.  We will probably not have to sheet mulch this to get rid of it, but believe me, once this class is over, this bit of lawn will be compost!

Sheet mulching is a technique anyone can use to kill off most of a lawn without herbicides. It's almost as easy as herbicide and, instead of introducing poison into your home's ecosystem, the dead grass actually will supply nutrients to the crop you eventually plant where your lawn used to live.
The process, described by Orchid Black on her blog, Native Sanctuary , is simply a matter of covering your lawn with cardboard covered with mulch and waiting about three months before using the space. Her article is slated towards planting a California native garden but, because I am concerned on this blog with planting food plants, I feel the need to modify her directions a bit. California Natives are adapted to a low nitrogen environment and food plants will prefer higher nitrogen area
In my world, first lay down three to four inches of compost/mulch (whatever you have on hand) before laying down the cardboard. Also water the site very well so the cardboard traps a good deal of moisture in the soil. Then I lay down my cardboard – and, as Ms. Black says, make sure there is no light getting through – overlap the cardboard pieces like crazy. Then cover with mulch for aesthetic reasons.
Unlike Black, I have had good luck with newsprint, although, it has to be many, many sheets thick and overlapped as well. I have heard that people wet the newsprint as they put it down, to hold it in place as they put it down (wind will make a disaster out of newsprint in one bright flash), which I see as more make-work than I care for. I like to keep a wheelbarrow of mulch handy and throw a few hand-fulls of mulch on the sheets before they can blow away. This has worked well for me, as long as I did it, but when volunteers have used newsprint, it hasn't worked so well – I think they just don't lay down enough. At a minimum, I'm thinking 10 pages or so over every part of the lawn.
This method works best with an actively growing lawn. It requires the grass to be active and growing in order to exhaust it's reserves. Remember that Bermuda stolons will hide under sidewalks – those areas that are adjacent to sidewalks will need special attention. I have dug a trench alongside sidewalks and lined it with cardboard placed in vertically to prevent those roots from re-infesting your garden.

Sheet-mulching is easy and effective.  The main drawback is that most of us want our gardens planted and producing yesterday.  Too bad that attitude is not very gardener-like.  A garden takes time and love and really doesn't come into being until the fifth year or so of planting.  And no matter how good of a gardener you are, it will take several years for you to acclimate yourself to any new garden site.  That's not a bad thing, but it rubs most folks in our society the wrong way - which is why we are so apt to use poisons and employ gas-powered tools to make it the way we imagine it should be.  Both of those methods kill the organisms in the soil and require a gardener to do a lot more work and spend a lot more money than was necessary in the first place.

Relax!  It will take time - allow your garden to flow from season to season.  Stop trying to control it as much and begin to see yourself as one who helps the process along.  Plants want to live and to produce.  Try to stay out of their way and enjoy the process.

It's a lot better for your peace of mind and your heart. 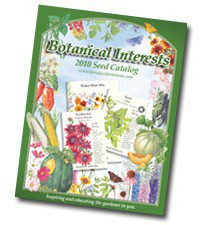 This is a completely revised seed list in an effort to avoid seed companies that carry Seminis (Monsanto) products. To my knowledge, none of the following companies carry GMO seeds.

BAKER CREEK HEIRLOOM SEEDS; 2278 Baker Creek Road Mansfield, MO 65704; 417.924.8917 What a catalog! Beautiful pictures of the produce – vegetable porn for sure. I have never ordered from them, but I have heard good things about them.
BOTANICAL INTERESTS; 660 Compton Street, Broomfield, CO 80020; 720.880.7293. I 'have been dealing with these folks for only a couple of years - I have seen their seeds on seed racks here and there, but I really got to know them for the quantity of seeds they donate to Venice High School and other educational programs. If you order using one of the links on this blog, you benefit the garden because a portion of your purchase goes into The Learning Garden's seed fund.  Good seed.  Clean.  Good variety and a good price.

BOUNTIFUL GARDENS; 18001 Shafer Ranch Road; Willits, CA 95490; 707.459.6410 Organic seed; open-pollinated. A part of the work done by John Jeavons, a proud and active member of the population of organic and open-pollinated gardeners. If you see him, he owes me a laser pointer.
FEDCO; PO Box 520, Waterville, ME 04903 207.873.7333 They are rabidly anti-GMO, though they do carry hybrids in addition to open-pollinated seeds. A wonderful and extensive selection. Someone who writes this beautiful deserves to get some of our money!

PEACEFUL VALLEY FARM SUPPLY; PO Box 2209; Grass Valley, CA 95945; 916.272.4769 I have purchased many seeds (and other things!) from Peaceful Valley – I love their catalog. They have an excellent selection of cover crop seeds as well as a lot of organic gardening supplies and tools.

PINETREE GARDEN SEEDS; PO Box 300, Rt. 100; New Gloucester, ME 04260; 207.926.3400 Probably the best for a home gardener – small packets of very current seed, a very good value. The smaller packets mean a smaller price so a person can order a lot more varieties and experiment. I have been a customer for many years.

SEED SAVERS EXCHANGE; Rt. 3 Box 239; Decorah, Iowa 52101; 563.382.5990 Membership fees $35. Free brochure. Some organic, but ALL open-pollinated. There are two ways to save seeds: one is to collect them all and keep them in a huge building that protects them from everything up to (and including) nuclear holocaust. The other way is to grow 'em. You can find the chance to grow them here. 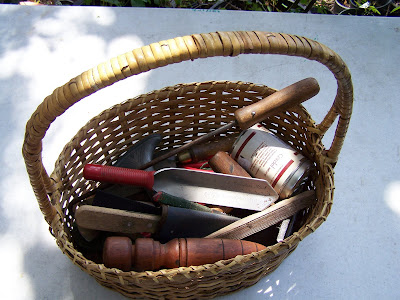 Just Starting Out or for Containers:

The asterisks (*) note my favorites.
A first aid kit nearby at all times is an excellent idea. Always dress to protect yourself from the rays of the sun (or thorny plants!) – long sleeved shirts and long pants with a stylish hat is best. Cotton will keep you coolest.

david
Posted by David King at 12:02 PM No comments:

Preparing the Soil for a Garden 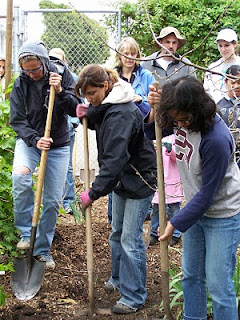 david
Posted by David King at 5:00 PM No comments: 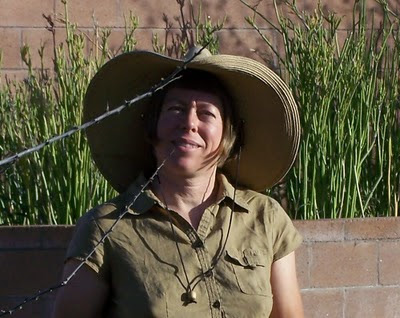 I’ll be teaching ‘Greener Gardens: Sustainable Garden
Practise’ at UCLA Extension starting Monday, April 5
with co-instructor Orchid Black. This will be the third time I've
taught this class, although this will be the first time it's being
offered as a twelve week course allowing Orchid to offer a more
thorough treatment (get it?) of water in the garden. We’ll be covering swales and  earthworks,  as well as appropriate use of greywater and rainwater harvesting, along with the basics of native and drought-tolerant planting. All aspects of sustainable backyard food will be addressed.

Following is a quote from the UCLA Extension website:
“Sustainability is today’s buzzword and many people seek to create a lifestyle with a more favorable impact on the environment.  From home and school gardens, to commercial sites, our gardens present the perfect place to start. Designed for horticulture students, gardening professionals, educators, and home gardeners, this course focuses on turning your green thumb into a “greener” garden. Topics include composting, irrigation, water harvesting, water wise plants, eating and growing local produce, recycling, and moving away from a consumptive, non-sustainable lifestyle when choosing materials and tools. … “
Teaching the class with Orchid will be a definite improvement for the course. In the past, she presented one night of water conservation which was obviously not enough depth. The class has been expanded from six sessions to twelve (half an elective to a full
elective) to allow her to develop the important issue of water conservation more fully and  allow students to come to a deeper understanding of sustainability in our world.

Here’s a link to UCLA Extension webpage for the class, which is still open:
https://www.uclaextension.edu/r/Course.aspx?reg=V6501
david