Honey Bees In Peril Means Less Food For Us! 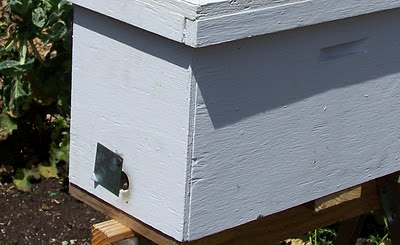 A simple five frame bee box that beekeepers call a 'nuc' (the 'nucleus' of a hive can be established in this small box), is home to a swarm of feral bees that needed a place to stay.  Situated near a plant in the Garden that attracts honey bees in mass,the box was a natural home for them to adopt.

At the end of the old millennium, scientists believe that up to 95% of the feral bee population of North America disappeared as well as over 50% of the human tended bee population. This decimation of bee populations was more than just alarming: it was catastrophic because of the horrific implications it has on food production. As much as every third bite of food we Americans eat is the direct result of pollination carried on by the honey bee. Without those bees pollinating our fruit and vegetable crops, we could have devastating famines. Every component of the natural world devoted to growing food has to work or we don't have food.
This is, in part, why many of us see modern agriculture's 'anti-nature' stance so troubling. There is no way that mankind is ready, or nearly smart enough, to try to control nature. The idea of raising herbicide resistant crops via genetic engineering is the epitome of hubris, thinking we can imagine, let alone control, all the ramification of such processes. In the United States, encumbered as we are with a government on Monsanto's payroll, there is no recourse but to take matters into our own hands.
At The Learning Garden, we don't wish to engage in politics, but we do feel the right to good clean nutritious food is everyone's right. That is why we set out this honey bee hive. We are very happy to report that a swarm took up our offer of residence and now we have at least one swarm of bees that has not been sprayed by folks who are unaware of the catastrophe we face if we manage to spray all the honey bees out of existence. Honey bees have a good chance of survival in the city, oddly enough, because there are no genetically modified crops being grown in the city and fewer flowers are sprayed with toxic chemicals – and if they are sprayed, it's with less toxicity than is used on most farms today. We, of course, don't spray any chemicals at all on any of our crops and that means there is lots of wonderful forage to sustain this colony and many, many more bees that visit the Garden from off campus.
Often when the topic of raising bees comes up, someone will express that they are allergic to bee stings. This is a very serious condition and is not to be trifled with. However, it is less prevalent than these conversations would lead one to believe. In my experience, one out of every five people will say they are allergic, when the national statistic is more like one in five hundred. Maybe a lot of them live in Southern California. Or maybe, there is just a lot of hysteria about a swarm of bees living in your vicinity. The truth is that the fewest stings occur from human kept honey bees, according to bee experts. Wasps and hornets, much more aggressive players in their encounters with humans, are the main culprits with other bees and feral honey bees making up the vast majority of stings.
Several cities have recently changed their ordinances to make beekeeping legal including New York and Salt Lake City. Efforts are underway in Santa Monica and Los Angeles to change the laws to reflect the desperate reality of the honey bee plight.
With the danger of losing our honey bee populations so very real and immediate, city laws must be changed to allow bees to be kept in urban areas. The concern is so real that many folks are accepting their place as scofflaws just to insure that the honey bee populations receive all the help we can offer. This is where we come down: the survival of the honey bee, and the honey bees place in our agricultural endeavors to feed ourselves, trumps 0ther concerns. All that can be, must be done to insure the honey bee continues her work in our fields, in our gardens and even in those gardens in our cities.
david
Posted by David King at 1:13 PM