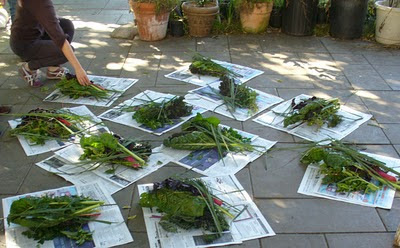 Plant in the ground: Too little light and too many parties make it difficult to find garden time – but if you have some things left over from November, try to get that done.
Plant in containers: Pretty much the same story, if you have time, do more of all that's listed from November.

There are two big shifts in Southern Californian gardening: At the end of September, beginning of October it's all about the winter crops. At the end of February, beginning of March, the focus all shifts to summer and the heat lovers. Seeds get started slightly before then (if you have the right conditions, up to six weeks before then!).
david
Posted by David King at 8:25 AM