Rhubarb Pie for the Masses 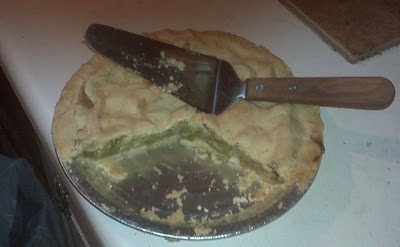 David King's Most Delicious Rhubarb Pie
The shot of the rhubarb pie shows a green filling rather than the accepted red of rhubarb.  The green rhubarb comes from our typical lack of frost.  Rhubarb, in cold climates, is revered as the first fresh thing a person can eat in those very early days of spring.  Rhubarb shoots rise from the base of the plant a brilliant red after being frozen for the winter, but not so many freezing winters in Los Angeles.  I know it LOOKS like 'celery pie' but believe me, it has that tart punch of rhubarb.  This version is not cloyingly sweet, like a Marie Calendar's pie would be.  It has some sweetness but still allows the tart, earthy taste of rhubarb to shine. Note that the leaves of rhubarb are poisonous; we only eat the leaf stem that botanists call the "petiole."
2 double pie crusts (I have never mastered making pie crusts, I admit, I buy them)
2½ pounds fresh rhubarb, cut into ½ inch pieces, or 2 20 ounce packages of frozen rhubarb, thawed and drained
1 cup sugar, or to taste
½ cup all-purpose flour
1 tablespoon ground cardamom
1 teaspoon nutmeg
Juice and grated zest of 1 bright-skinned orange
Preheat the oven to 350 ° F
Cut the rhubarb into pieces and fill your pie crusts. Combine all ingredients except rhubarb in bowl. Spoon this mixture as evenly as you can over the rhubarb – the act of baking will take care of the distribution of the sauce. Cover with a top crust and pinch to secure.  Cut openings for steam and sauce to bubble through.
Bake for approximately 50 minutes, until the filling has bubbled and thickened. Let cool on a rack before serving.
Makes two pies.
This is a bachelor male's adaptation of a Martha Stewart recipe

which takes about 3 hours longer to make.