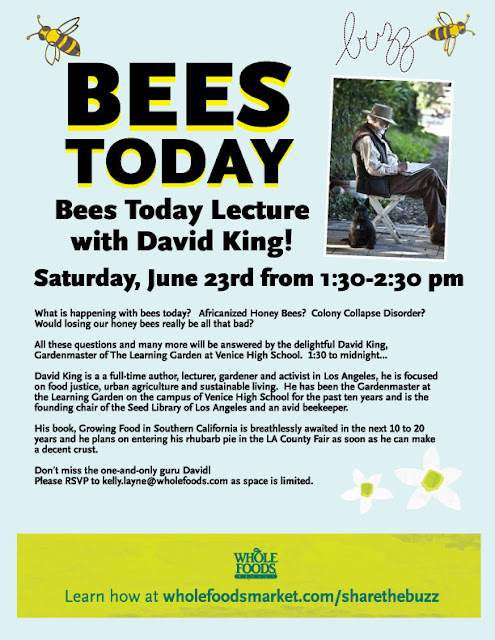 Posted by David King at 2:50 PM No comments:

Looking around at the agricultural landscape of America today, I have always felt that the undiscovered 'ace in the deck' was urban agriculture. It is in an urban setting that organizations like SLOLA (Seed Library Of Los Angeles) can create a lending library of seeds uncontaminated by GMO technology. Most of the pesticides and chemical pollution that is wrecking havoc on the rural ecosystems have been avoided to a large degree in the city. In fact, as I drove in to work this morning, I was writing a blog post to extoll the virtue of Urban Agriculture. Little suspecting the furor I would find via Face Book about Monsanto's GMO sweet corn making its way to market.

I knew that GMO seeds were only sold to farmers which left our little plots in the city free from the contamination afflicting most of America's rural communities. In the sanctuary of the city, bee populations could be saved and no matter what horrors M0nsanto's greed could conjure up, we were the oasis from which a decimated US agriculture could be rebirthed once the lies and greed of chemical ag were exposed and the cancer removed.

Sadly, we might be turning a corner that can wreck that concept. Monsanto has developed a GMO sweet corn they intend to market directly to consumers. Seeds to consumers for consumers to grow. This is a new paradigm.

Monsanto's work with corn has been disturbing all along. In the first place, corn is a wind pollinated crop, the pollen from the tassels is carried on the wind to alight on the silks (the female flowers of corn) on other plants. Monsanto, when applying for the permit to begin selling GMO corn, told the US Department of Agriculture that their research proved corn pollen had an effective range of five miles; in other words, fields within five miles of a field of GMO corn had the possibility of being contaminated with the modified pollen. Subsequent research has shown that Monsanto lied with that figure: Corn pollen can be viable up to 20 miles from the site of origin. Mind you, this is under ideal conditions, but that's the figure we should have been working from in the beginning (and calls into question a good deal of the lawsuits Monsanto has brought for their technology being “stolen,” by adjacent farmers; was it simply pollen drift?). At any rate, it is only one figure where Monsanto has been less than honest with the facts.

Furthermore, their gene splicing for this product (as with other GMO corn varieties) involves the use of Bacillus thuringiensis, called Bt by most, and much beloved by organic growers. Bt is one of an organic farmers' best weapons against several different food plant pests. Monsanto's use of Bt in this fashion, a wholesale prophylactic over millions of acres, will soon render Bt useless by organic growers; it is simply a fact of nature that any pesticide used on a mass scale, to the exclusion of any other pesticide is guaranteed to produce a resistant strain of pest – thus rendering Bt useless to everyone, but especially to organic producers who cannot go back to the lab and come out with a new and bigger Frankenstein to fall under Nature's scythe of progress.

This is the dance of life: if you invent a bigger flyswatter, Nature replies with a faster fly. We see this already with Monsanto's Round Up Ready GMOs. Already, weeds are evolving into what are being called 'super-weeds.' It was inevitable. Scientists working on Round Up ready crops, surely had to be thinking to themselves, “I need to get to work on Round Up Ready 2013!” and Monsanto, being the buck making machine they are, had to planning the release up updates with the same frequency as Microsoft's many versions of Windows. And Monsanto's upgrades each have to have a harsher effect on the environment in order to continue to be effective.

Let's put this into perspective: we don’t need GMO technology to feed a starving world. GMO technology is not a tool for progress. It is simply a way for some rich men to get richer. And believe me, when the shit hits the fan, which it will sooner or later because the very model is flawed, you and I both know they'll be crying poverty as birth defects and disease wash over their unsuspecting victims who were only trying to find cheap food. The wash of their products is already all over our plates: you cannot eat pre-prepared food (?), nowadays, or food from ANY chain that is not contaminated, there simply isn't enough non-GMO soybeans and corn in our food systems to supply these big chains with non-GMO products.

And meat? All that corn being fed to cows and chickens is GMO, so most of the meat needs to be considered GMO food too.

ALL major brands of food in the US are made with GMO crops. Already. Unless you buy from someone you know and trust at a farmers' market or you grow your own. Or you are independently wealthy enough to buy from specialty markets. We are fast approaching a food system that is healthy only if you have the money and time to find the uncontaminated stuff. Those without the means are left to poison themselves and their children (in a sad twist of fate, we also ration our medical care to the wealthy, a plank the Republican Congress seems perversely proud to acknowledge).

Allowing GMO pollen into our city gardens stands to ruin our national agriculture and set it bac even further. It is our last bastion of genetic freedom from the criminal likes of Monsanto and the other industrial ag companies that have never had the slightest twinge about poisoning you, your children and the earth. When their chickens come home to roost, as they surely will, agricultural exports from the United States will be banned the world over and it will take decades for our agriculture to recover. If there are islands of GMO free agriculture, our country can recover more quickly – we'll have non-GMO seeds to work with and we have nonGMO technology to step in to rebuild our agricultural infrastructure.

There is no quick fix for this. Calling our representatives in Washington has had little effect in the past, to slow the USDA from adopting GMO technology (even though their own 15 year study showed little or no increase of productivity over conventional nonGMO production), but call them anyway; perhaps mounting pressure will do the trick. Monsanto has bought and paid for the best government their money can buy.

However, on the local level, even Monsanto cannot to afford to buy off many different local governments over the country. Thus, let's work for Los Angeles County to adopt an anti-GMO ordinance like we find in Mendocino County! We need to establish a GMO free zone around our seeds in Los Angeles to protect us from the contagion of unproven technology infesting the rest of our country. Monsanto probably isn't as willing to spend big bucks – after all, we are an urban county. But we have the potential to be a massive food growing region. Remember, LA was settled first as an agricultural paradise – we can produce a lot of food here. We might not be able to feed ourselves all our food needs, but we can make a dent and, even if all we can do is make a dent, we must make that dent.

Posted by David King at 2:54 PM No comments: