WTH (What The Horticulture) Wednesday: A Source of ??? At One Location

Not far from where I live, a perfectly good little house (3 bedrooms, 2 bath, garage and all the other rooms you would expect) was demolished and a huge two story behemoth built filling 90% of the lot with HOUSE. The architect should be subjected to a public whipping or perhaps put in stocks for a week or two for this monstrosity.  (OK... be it noted, I am not a fan of the REALLY big house for many reasons and I think ostentatiousness is unbecoming, so this castle starts in the negative numbers with me from the beginning and goes downhill.)  I have taken to calling this thing "The Houseboat" because of it's very rectangular shape and absence of any line of interest from the outside.

But OK, put a paper bag over the house and the landscaping will probably still make three separate appearances in the WTH Wednesday series.  The landscaping of this place is truly one of the most dismal plantings anywhere in the city with a completely idiotic plant choices and placement.  There is not one single plant in this garden that ought not be yanked out and dumped. OK...  Leave the pansies, but everything else must go.  Today we concern ourselves with little 'over-reaching' of the sidewalk. 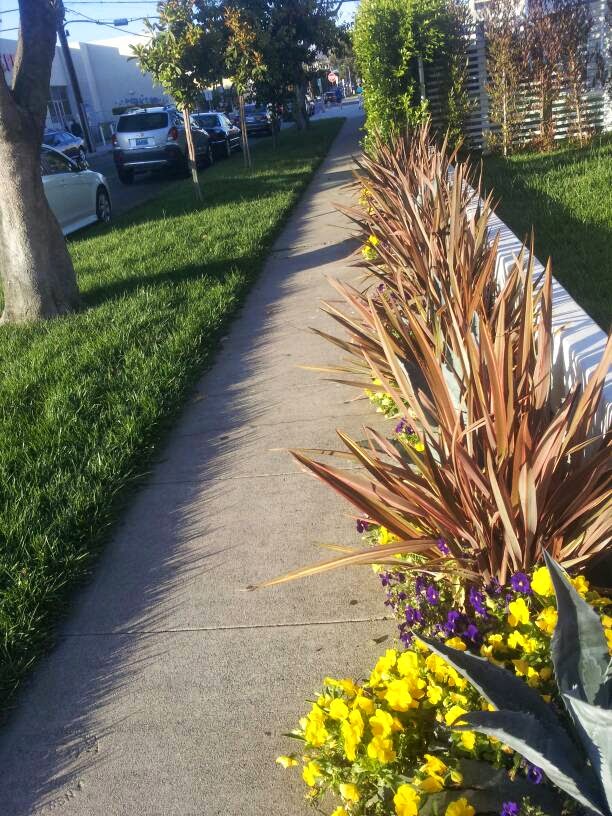 In the lower left corner you see an agave and a New Zealand Flax.  I'm not certain which agave it is, but most agaves with that kind of leaf are large plants, I'm talking three to four feet from center with spikes in the tips of the leaves.  Here these plants are in a planter bed about 18" wide abutted on the left hand side by the sidewalk and on the right by a cement wall of about twenty four inches.  The cement wall probably won't give and in about six months, the agave will be growing over the sidewalk preventing pedestrians from walking on the side walk - I mean it will easily do that - agaves have a wingspan of something like four to six feet!  And with the cement wall tilting it towards the sidewalk - even more - possibly to cover the entire walk way.

And how about that rust colored sword bearing plant in this long bed?  That is a Phormium tenax often called New Zealand Flax.  Wikipedia describes the leaves of this plant as "The tough, sword-shaped leaves grow up to three metres long and up to 125 mm wide."  To help with the metric conversion, three meters is more or less nine feet and 125 mm works out to about five inches.

Sidewalk?  What sidewalk? I guess they'll have to walk on the lawn that is watered without conscience or regard to expense and sprayed with enough chemicals to kill a few household pets.  Better yet:  I'll take a machete to it!

This was not done by a clueless homeowner.  Some professional drafted a design and called for these plants to be planted here.

It would be laughable if not so disgustingly  stupid.  And wasteful.

NB.  Just last night I walked down that sidewalk in the picture.  In the distance, the green hedge is Ficus benjimina, AKA, in my world as F. peukus, my own "phauxtanical" Latin.  These trees have not been trimmed since they were installed over a month ago and are already impinging on the pathway.  One gets the sense of a garden designer and a homeowner with little regard for pedestrians or neighbors, or plants for that matter.