I think the first seeds we got were the fifth generation, but don't quote me on that. This was a growing project started by Craig Ruggless of Winnetka Farms, a small farm in the San Fernando Valley which forms the Northern Edge of a good deal of Los Angeles. The project had very easy parameters – very clear and observable.

Think of the very best of the commercial artichokes – hold a picture of that choke in your mind. You will see a very large choke with tightly wrapped bracts and the tips of those bracts are not pointy without any spines of much note. Certainly none to fear.

If you have had the purple artichokes available in the markets, the difference is astonishing. Purple chokes have chokes that are 50% or so smaller than the green chokes, the bracts are pointy and possess a dangerous little needle on the tip of each bract and not enough purple to obfuscate the blood effusing from your wounded fingers.

Craig's brilliant idea was to get a purple choke with the same civilized attributes as the green choke. Then, life being what life is, he bought a farm in Vermont which I am led to understand is not a prime site for growing artichokes of any color. SLOLA was bequeathed a quantity of seed and some drying chokes so we could see what the “ideal” Winnetka Purple Artichoke should look like. And with the easily seen goal and perimeters the continued work with these chokes certainly was the perfect project for a fledgling seed library: Good for the chokes and a great teaching tool for the library.

Like I said, it was about the 5th generation that was bequeathed to us. In breeding parlance it would be known as “F5” - “F” standing for “filial. Many people took seed, but the only ones I know that were returned to be a part of the seed library came from members Joy Sun and Julie Mann. And each had a distinctive population with characteristics different from each other.

The Sun group plants were HUGE. We are talking 8 foot plants and the chokes were enormous. They had the correct shape and the pointy ends were not blood letters. They had one drawback in my mind: They weren't very purple.

On the other hand, the Mann group were normal sized plants. The chokes were a good size but not Green Goliath size, they seemed to adapt to civilization with aplomb and not eager to draw blood.

I have four chokes from the Mann Strain – I have started seeds of F7 - another generation having been grown between then and now -  and intend to grow them out at the Learning Garden – which is where the Sun strain is growing. These population sizes are of some concern to me as we might create a bottle neck if we don't grow larger numbers, but I think we move immediately to larger populations, we can avoid that. 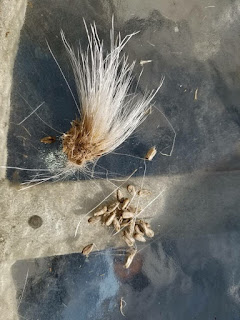 Getting the seed from the dried artichoke is straight forward, if messy.  The tufts at the top are the remains of the artichoke flower.  The seeds are dried together and break away like one would break away small bits from a very thin cork. 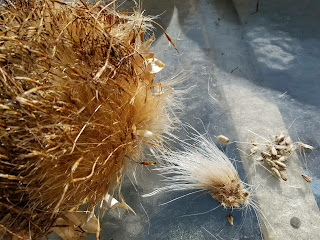 The size of the choke itself compared to the seeds.  I have kept some chokes intact and dismembered others for seed.  The most important thing is to keep the seeds away from predation!  Overnight that can ruin the whole process and - afterall, one cannot go to the store and buy a replacement packet of seeds! 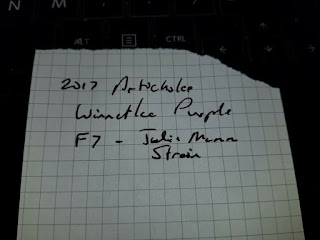 Packing the seeds I did not plant for safe keeping involves proper labeling!  This label is put inside the jar with the seeds with the same information on the label on the outside of the jar.  All too often something happens to the outside label and then what would one do?

Just like eggs, do not put all your seeds in one basket.  In a future report, I hope I can show you some results and keep you posted on the progress.

A seed library is a library that deals in living material.  We bend and shape the future based on the decisions we make in the field about what to save and how we will save it.  Will I decide to cross my Mann strain with the Sun strain?  Or will I try to keep the two strains separate?  Will I do a little of both?  Stay tuned!  I haven't yet decided!

david
N.B.  This post will be updated with more photos of the different strains and better comparisons between the two.  Also with each new filial generation, new assumptions and decisions will be made.  Follow the drama of plant selection with me!