In A Hundred Years: An Essay

In a few days we'll celebrate Veterans' Day. It's only been “Veterans' Day” since 1954. It is still observed in other countries under its old names: Armistice or Remembrance Day. The observance began in the early 1900's – 1918 to be exact. On the 11th day of the 11th month at the 11th hour, hostilities of the major players along the Western Front in the First World War would cease. This is the beginning of observing that day for veterans; for no more war.

At the end of World War 1, the cost of the war in terms of life and destruction was so huge, most who participated in that war could not stomach the thought that the war had accomplished nothing – mind you, in its immediate aftermath, there was no way a sane person could rationalize the cost of that war, when gaining mere feet at a cost of a thousand – or many thousands of lives was too much to bear. It was called “The War To End All Wars.” Those who lived it, thought it could not be too much to ask for mankind to avoid such horrific butchery of the human species ever again.

With astonishing rapidity, a small group of madmen led the world into a second horrific war, which was to be called World War II, proving that insanity isn't solely invested in a single generation. Humans who aren't capable of engaging with other humans who do not look like them, cannot be trusted to do the right thing. They are too shallow and too fearful – for it is fear that causes a lack of engagement on the political stage – and do not have the intelligence to comprehend and appreciate plurality. In their feckless claims to power they over-promise and under-deliver because they have no substance – no matter how violent and large their army, in a generation they are gone.

We know now, without a shadow of a doubt that a similar war – with more modern weapons – is not a distant possibility. The Russians have huge stockpile of nuclear weapons as does the US and other countries a little less. But we all know that there are only a couple of buttons that can make these monsters go boom. Whether or not you think of it daily, I would believe that everyone capable of reading these words would never want to see even the smallest of those weapons unleashed.  And the truth is, even if only one is unleashed, it will be followed by many, many others and life on earth will be over.

We cannot be the generation that acts so recklessly. I am fraught with fear over the lack of common sense in our leadership today - I am filled with fear at the rhetoric and lack of decorum and common sense. I am maddened by the name calling and the dehumanizing of people who don't quite match the white man. History shows us that all of this was done before and directly created and set the stage for WWII. We cannot go down that path once again, because the road is far too dark and the unseen is all too certain. The substance and essence of all living generations being vaporized over a dispute, and assuredly a petty dispute compared to what follows, is too much to bear.

It will be on our watch. Veterans Day, by any name, will be worthless. All of human kind's efforts destroyed by only ego. And in this moment, consider that we have two observances ahead - two traditions – that we must consider.

In the first, we must go to the polls and vote on November 6th - and we must vote for integrity and competence - for honest and not name calling - for truth and not for falsely concocted crises at our borders or in our heartland. We cannot listen to the money changers and the hopelessly rich. Leaving the booth, we must be able to look the old woman in the eye, the drug addicted, the homeless, the jobless and the forlorn.  We must hold our head high before greed and injustice.

In the second, on the 11th day of the 11th month, we do not need to show up at parades or stand and salute the flag because those who march in the parade and the ones whole enough to march. There are many shadows behind those marchers. The ones who didn't come back; the ones who cannot leave their sick bed. The cost of war - ANY WAR - should be enough for us to never declare war. It is a horrid shame that a people, a democracy, should ever go to war, let alone be the aggressor. As a people, we have no quarrel with other peoples. The quarrel is created to sell more bombs and shoot more missiles and charge more dollars. A democracy should only defend it's borders, it should never be the invader.

This is time for sobriety. To consider who we are as a people as well as who we are not. Let us give up the vice of fear, decide as a majority that fairness and hope, not profit should be our diplomacy. That clinging fiercely to the Old motto of our country, "Out of many, One." There is a light to be held in the darkness. Our lives and the lives of the children are in the balance this year as never before.

We can be Americans - neither Republican or Democrat, neither Christian nor Hindu; neither brown nor black nor white nor in between. Honestly, between you and I and that stockpile of atomic weapons, it is our world to make better or make go away.  And it is past time to act as this is the truth.

Sorry this isn't very gardenry. I'll be back on topic in a short hitch. Meanwhile, go vote.

Posted by David King at 2:34 PM No comments: Links to this post

The November Edition: What To Do and When To Do It

What To Do and When To Do It is the informal name we have given to the monthly 1st Saturday class in The Learning Garden, 10 to noon.

November 3rd is coming up fast and I've been so busy, I haven't got around to writing about the class until just now. In my defense, I had a hard drive that had gotten too much data for it's own health and I ended up replacing it myself.  Not without a couple of close of moments closely resembling a heart attack!  But now I'm almost completely back in business (don't ask me what happened to my back up system though!) 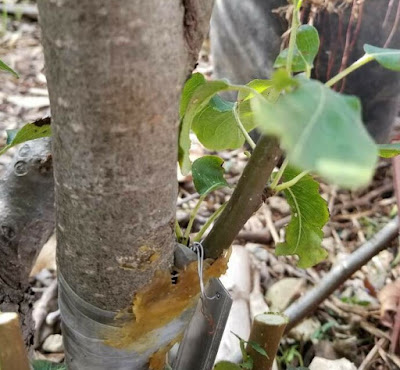 Not the best shot in the world, but you can see the wire holding a tag in place. and the brown material is grafting wax.This was a demonstration graft in my 2018 Winter Grafting Class and the blurry part is a leaf of the graft that has obviously taken! The photo was taken as we inventoried plants we will lose in an upcoming construction adjacent to the garden. But it has a point!

This Saturday's class we will do our usual questions answered and we will plant some winter crops and check on my garlic and carrots we planted last month, but we will also explore planting fruit trees for your eating pleasure.  These trees will live twenty or thirty years - if we care for them - and with that kind of production, it is prudent to become educated about fruit trees and which ones do best here and which ones taste the best.

All this AND some free seeds! And some good laughs!

Posted by David King at 9:54 PM No comments: Links to this post

Almost a whole two months since I've said hi. Been Busy. But as the days get shorter, I've got a little news to share.

The UCLA Extension that oversees my classes has found a location on the campus for me to teach so look for an Urban Gardening, Spring Edition in  the next quarter's listings.  This will be like the Fall Edition except with the warm season garden. To make it worthwhile for those who take the Fall class, I'm changing some things up and we'll have enough difference to make the class worthwhile. Look in this blog for more details upcoming.

I'm very excited about the Spring offering!  I had always envisioned there be a Fall and Spring - those two will bring a gardener full circle and experienced with the whole year. We've always needed a Spring class and now we have it! I hope to see you there and I hope you'll find yourself learning as much - or more - than you did in the Fall Quarter.  For those who haven't had my Fall class, both classes can stand on their own. The best is both, but if you can't do both, you can do one or the other and still you'll have a great learning experience! 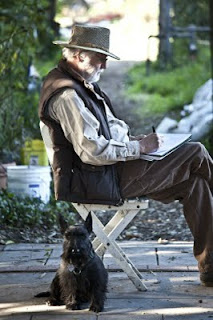 I've waited a long time for the spring class and I hope to see you there!

david
Posted by David King at 9:26 PM No comments: Links to this post